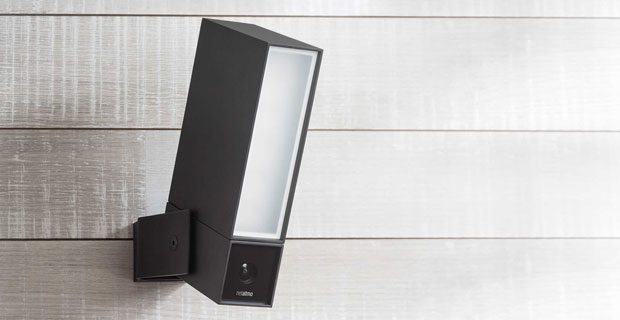 Netatmo on Monday announced a smart security camera and floodlight combo at CES 2016.

The Presence camera is designed for outdoor use and can identify objects such as people, animals and vehicles.

The camera, which connects to a rectangular floodlight, can be customized to send alerts to a smartphone app or desktop browser based on what it sees and where it sees it.

For example, it could be customized to ignore cars that pass by a home but send an alert when a vehicle enters the driveway.

All video the camera captures is stored locally on a standard SD card. That means no monthly cloud storage costs or fees for a homeowner who wants to see the camera feed after receiving an alert.

“Not paying a monthly fee is a really big deal for us,” said Netatmo COO Matthew Broadway. “We think it’s a bankrupt model to sell people a product and then pay for that product over and over again through subscription fees.”

By storing the camera’s video locally, the company also avoids privacy issues that could arise when video is stored in a cloud run by a third party, he told TechNewsWorld.

“We decided to stay clear of that,” Broadway said. “We store all the video on the camera itself and tell the user, ‘It’s your video. You keep it. We don’t want to touch it.'”

With on-camera storage, of course, there’s always the chance that the storage card will be stolen. However, all video on the SD card is encrypted with bank-level security, he noted. In addition, it can be viewed only in the camera with which the video was shot or the individual smartphone paired to it.

If users are worried about losing the video on a card, they can set up a server and mirror there what’s captured on the card.

Broadway expects Presence to be popular among do-it-yourself homeowners.

“I think DIY will be a big thing for us,” he said.

“If you have a floodlight already on your property, you can simply take that off and put our camera in its place, and you get a camera and a floodlight in one,” Broadway continued.

The trend toward DIY monitoring is growing, noted Blake Kozak, a principal analyst at IHS Technology.

“A lot of end users are a bit tired of the monthly payments for professional monitoring services,” he told TechNewsWorld. “They’re looking for alternatives.”

When the floodlight is off at night, the camera uses infrared technology to detect objects.

Since the unit is designed as a floodlight replacement, it requires AC power.

“Batteries sound great, but in any product that has batteries, it’s always the batteries that go wrong first,” Netatmo’s Broadway said.

Presence isn’t Netatmo’s first smart camera. At last year’s CES, it introduced Welcome, a sub-US$200 indoor camera that uses facial recognition to identify people who appear within the unit’s purview. There have been reports of slow performance in recognizing faces, which may be why that tech was omitted from Presence.

Netatmo expects to start shipping Presence in the third quarter. A price hasn’t been disclosed yet, but given the pricing for Welcome, it will probably be very affordable.

“We’re talking about mass-consumer-market pricing that enables the technology to be adopted by as many households as possible,” Broadway said.

“We’re not into crazy, exclusive, high-end pricing models,” he added. “We want to deliver ground-breaking technology to people but at a price that as many households can afford as possible.”

Smart but Not Compelling

With consumer electronics in the doldrums, some vendors are looking for demand for smart home products as the next big thing, according to Charles King, principal analyst at Pund-IT.

“In the technology industry right now, we seem to have reached a holding pattern where some of the reliable categories where vendors have seen growth in the past aren’t showing as much growth now,” he told TechNewsWorld.

“That’s happening in traditional PCs and even in smartphones now,” King said.

“Vendors are looking for new areas to leverage their technologies, and developing smart home technology seems to be what a lot of them are going after right now,” he added.

However, the market has yet to take off as expected.

“The technologies we have today are better suited for smart homes than they’ve ever been before, but there’s no guarantee that this is going to be the next big thing,” King said.

There is one bright spot in the smart home market: security.

“Security is one of the entry points for the smart home in terms of consumer demand, but overall demand is much slower than many companies anticipated,” said Greg Sterling, vice president of strategy and insight for theLocal Search Association.

“I don’t think consumers are sold on the benefits of the smart home in the abstract,” he told TechNewsWorld. “Converting conventional appliances to smart devices isn’t seen as a necessity.”

“They’re something people are very interested in and willing to pay for,” he told TechNewsWorld.

Many cameras in the market now will generate alerts based on when they see something, but not based on what they see, O’Donnell added.

“Object recognition seems like a logical next step for these cameras,” he said.

Some companies trying to enter the smart home market see imaging in general as a means to make their products more attractive to consumers, noted Jim McGregor, principal analyst at Tirias Research.

“Imaging isn’t limited to security companies,” he told TechNewsWorld. “A lot of applications for home appliances are starting to integrate image recognition.”

How to Stop an IT Disaster From Wiping Out Your Data

Nothing can derail a business more quickly than a tech disaster. Whether it’s an electrical storm or fire that fries your system, malware that infects your network, or physical damage or wear-and-tear to servers, loss of data can be devastating. Luckily, there are two simple things every business can do: work with a specialized company […]

Jump up and down to charge your phone

LAS VEGAS: A little exercise not only does your body good, it can charge up your smartphone. Evanston, Illinois-based Ampy showed off its Ampy Move, a wearable battery pack that charges with up and down motion that makes a couple of magnets bounce up and down inside coils. That’s an electricity-creating process invented by Nikola […]