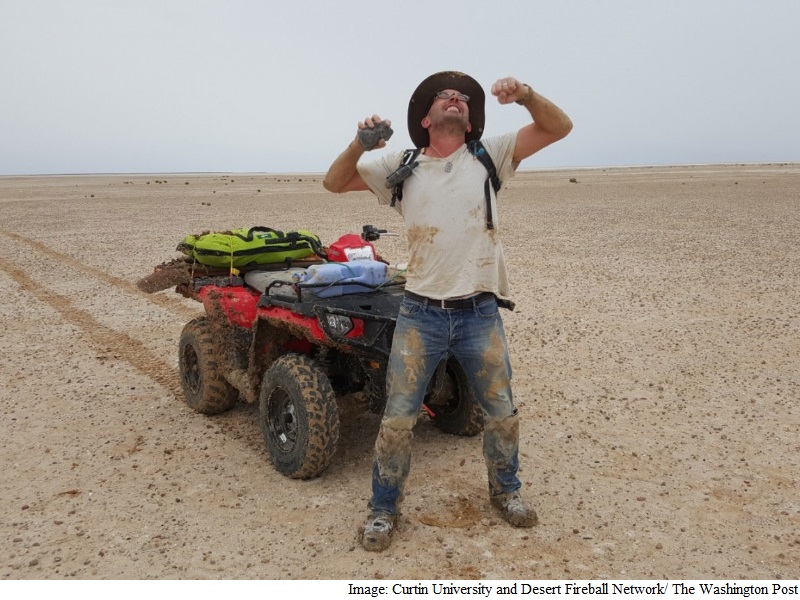 On the 27th of November, a network of high-tech cameras glimpsed it falling from the sky: a shining meteorite zipping through the earth’s atmosphere and landing somewhere in the Australian outback. The journey was visible for about six seconds, a long exposure for such an event.

By New Year’s Eve, planetary scientist Phil Bland and his team from Western Australia’s Curtin University had made their way to Lake Eyre, where they’d tracked the space rock’s trajectory to a crater in the lake’s solid salt crust. To reach it, Bland rode on a quad bike through the sweltering desert (it’s summer Down Under), navigating the damp clay until he arrived at a small cavity in the ground.

From where he was standing, Bland could just barely make out the shoreline four miles away. “It is an almost surreal place to be,” he said. With no civilization in sight, the treasure he sought was right in front of him.

The digging took no more than five minutes by hand, and then Bland had it.

“It’s an iron meteorite,” Bland said breathlessly, cradling the discovery in his palms.

In an interview with The Washington Post early Thursday, he gave a more erudite summation of why the occasion was momentous. It was, after all, the first meteorite to be discovered through the new iteration of the Desert Fireball Network, an observation system of automated cameras stationed in remote or rural locations. When it is completed, the still-growing network will provide combined images of the night sky over roughly one-third of Australia.

The system allows the scientists to say with precision that the meteorite originated from the asteroid belt between Jupiter and Mars – a location claim that has been made with certainty for only about 20 other meteorites in history, compared to the 50,000 discovered meteorites with unidentified orbits.

Researchers have been trying to use sky surveillance for planetary science for the last 50 years or so, but the Desert Fireball Network is unique in that it makes use of the barren Australian outback. Past networks have been situated in hilly or forested areas, making meteorite recovery extremely difficult.

Before Bland found the meteorite last week, he didn’t know if their network’s technology would pan out, either.

“We built this whole blooming network and the hardware is really innovative,” Bland told The Post, “there are a bunch of technical developments that can do things for a lot cheaper. But you don’t know how any of it works – if it works – until you find a little rock on the ground.”

His team believes that the little rock, either a chondrite or stony meteorite, and the implications of its discovery will reap big scientific rewards.

To start, Bland hopes that a more comprehensive analysis of the cameras’ images from the meteorite falling through the sky, taken from various angles, will yield the precise location or even asteroid from which it came.

Zoning in on the latter would be a major development, as space agencies have spent over a billion dollars on probes to retrieve samples from asteroids. Using a network like the Desert Fireball to find meteorites and pinpoint their origins would produce the same information, except far more cheaply and right on Earth, Bland said.

The meteorite discovery also validates the data on “fireballs” that Bland’s team has compiled. The network has gathered information on 600 fireballs and their orbits, which he estimated is double the total existing data set on such big, bright asteroid chunks.

Even though the majority of those meteorites have already burned up or will simply never be found, the cameras’ precision photography alone can yield valuable information about how the solar system was formed.

When Bland dug up the meteorite, his team (comprised of an aerial spotter, a drone, another researcher and two local Aboriginal guides) had already been scouring the muddy terrain for three days. They were starting to despair that they wouldn’t find it before the heavy rains hit. It was an unusual way to spend the last day of 2015, Bland admitted.

After that afternoon’s find, the scientist was so tired he fell asleep before the clock struck midnight.

“I actually didn’t get drunk,” he recalled with a laugh. “Most people are doing something else on New Year’s. Most people don’t have their hands in a salt lake.”

It rained while Bland slept, and all trace of the meteorite’s landing site was wiped away. But never mind – his next target is its starting point.

Surrounded by some of the most beautiful scenery in the world, people attending a conference in Banff stare at screens and keyboards. Not that you can blame the nearly 250 delegates in attendance for August’s 2018 26th IEEE International Requirements Engineering Conference (RE’18) — because as interesting as the Rocky Mountains are outside, it’s the discussions going […]

Snag this illustrating software on sale for 50% off

Let’s face it: Technology makes life a lot easier, doesn’t it? With a few swipes and taps, you can do just about anything from hailing a cab, to meeting romantic suitors, to ordering a heaping plate of lo mein straight to your doorstep. However, one of the (very) few things technology can’t simplify is art. Sure, there […]