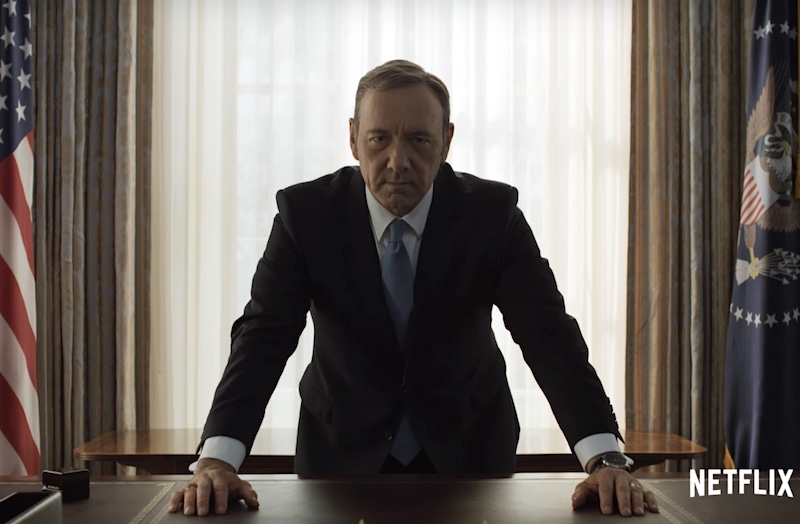 If Underwood’s character, played by Kevin Spacey, didn’t seem shady enough, the new season seems to take things to the next level. In the trailer we see President Underwood, dressed up as a presidential candidate, seeking re-election with his speech.

In the speech, we see bits of the crimes Underwood has committed over the previous seasons to climb up the order while promising Americans that their future is in good hands with him. In the teaser, we also see Underwood’s influence on Pennsylvania Rep. Peter Russo, and intimate relationship with reporter Zoe Barnes, both of whom were (spoiler alert) murdered by him in previous seasons.

We also get to witness the continuing rocky relationship between him and Claire, his wife. Viewers are expecting to see news of their separation made public in the upcoming season. This, as you could imagine, could have an impact on Frank’s political position.

As for what to else to expect in the upcoming season, Underwood, who was appointed as the President of the United States at the end of Season 2, might get re-elected. Though that is going to be tough, as evinced by his unpopular impression with citizens as well as his allies, who withdrew their support in Season 3.

The teaser also shares Underwood’s campaign hashtag #FU2016, wittingly revealing his character and his malicious intentions. “We get the leader we deserve,” Underwood says. The new season will be available on Netflix on March 4.

Creating your own whole-home DVR system is about to get a lot simpler, thanks to Plex. Plex Media Server users can now record live TV with either an antenna or a CableCARD using SiliconDust’s HDHomeRun tuners. They can then stream those recordings to phones, tablets, computers, game consoles, set-top boxes, and smart TVs. The feature […]

WASHINGTON: Self-driving cars are involved in fewer crashes on average than vehicles with a driver behind the wheel, a study released on Friday by the Virginia Tech Transportation Institute shows. The study was commissioned by Alphabet Inc’s Google unit, which has reported a series of minor crashes involving its self-driving fleet. It looked only at […]