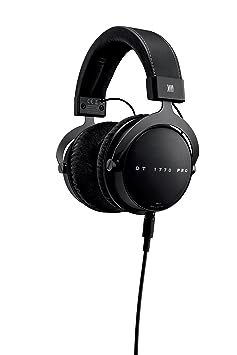 When I first donned Beyerdynamic’s new studio reference DT 1770 Pro headphone it was the comfort that surprised me. For once ear pad pressure against my noggin was commendably low. As high-end headphones go, the DT 1770 Pro is right up there with the easiest to wear for extended periods of time. The sound was definitely up to Beyerdynamic’s high standards.

Design wise, I like the DT 1770 Pro’s fresh look, it’s a handsome headphone. It features the latest advancements in Beyerdynamic drivers, which are now called “Tesla 2.0”; and the 45mm driver is ahigh impedance, 250 ohm design, intended for home, not portable use. That said, good quality portables like my FiiO X5 Gen 2 sounded great with the DT 1770 Pro. It’s a closed-back, over-the-ear design, and it did a good job blocking external noise. It comes with two 10 foot (3 meter) cables, one straight, one coiled; the cables plug into the left ear cup via a locking mini XLR connector. You get two sets of ear cushions, velour and artificial leather, and a large carry case. The headphone weighs 13.7 ounces (388 grams) but feels lighter than that. The US retail price is $599, £399 in the UK and AU$886 in Australia. The DT 1770 Pro also comes with a two-year warranty.

Listening to Ryuichi Sakamoto and Alva Noto’s deeply atmospheric “The Revenant” soundtrack was a real thrill. Low bass tremors, swooshing synths and careening strings were all bathed in deep reverberation that seemed to come from all around my head: the DT 1770 Pro could do no wrong.

The DT 1770 Pro looks, feels and sounds like a strong contender in its price class.

Facebook and Microsoft made their Virtual Reality (VR) intentions quite clear last year, and now Google wants to ensure it is at par with the rivals. So, Google has announced a separate division that will solely focus on virtual reality. The search giant has now announced to ramp up and build a VR division. Citing a […]

Technology is in an incredible place in 2019. There are so many new gadgets coming out seemingly every day, and tech enthusiasts have never been more excited. In terms of video games, a new Xbox console was announced at the electronic expo last month. Sony is slated to announce the next PlayStation console at some […]