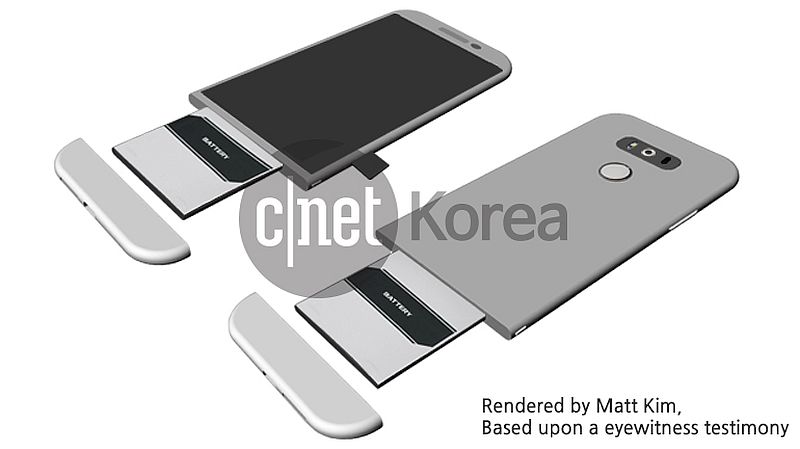 We may finally see a modular smartphone next month and it won’t be coming from the popular Project Ara team. LG is rumoured to launch its G5 flagship smartphone featuring a new modular design where the battery can be accessed from the bottom part of the phone through a slide-in and out scheme.

The latest rumour comes out of South Korea and CNET has even made up a mock-up render of the LG G5 purportedly showing the modular design. CNET Korea notes that the G5 mock-up render is based on an eyewitness testimony. LG is said to opt for a modular design for the G5 flagship in order to get rid of popping rear panel design as well as in order to keep the handset slim. In the mock-up render, the G5 is seen featuring volume rocker on the sides tipping that the South Korean may finally get rid of its rear volume rocker placement, first seen on the LG G2.

In the leaked render, the G5’s detachable bottom panel is seen housing the Micro-USB port which tips that the charging port of the handset can be disconnected from the handset. An earlier report claimed that LG G5 will pack a ‘Magic Slot’, which will be one of the highlight features of the handset, and was said to be linked with some kind of hardware expansion. We assume that the sliding bottom panel may be dubbed ‘Magic Slot.’ The LG G5 is said to sport a unibody metal build.

Another highlight feature of the G5 that is being rumoured for long is the “ticker display” which is likely to sport a screen resolution of 160×1040 pixels, again same as the one found on the V10 smartphone.

Some of the rumoured specifications of the G5 include a 5.3-inch QHD (1440×2560 pixels) display; Snapdragon 820 processor; 16-megapixel rear camera, and a fingerprint scanner.

Recently, LG confirmed its presence at the upcoming MWC 2016 that will take place in Barcelona from February 22-25. LG is one of the first tech companies to have sent out invites for its MWC 2016 event.

Uber Technologies Inc said on Wednesday it has received almost $2 billion in funding from Chinese investors, some as part of a recent fundraising round that valued the U.S. firm’s Chinese unit at $7 billion. Uber’s main global entity received the rest of the money, though the company did not specify how much each unit […]

At the Geneva Motor Show, the beautiful… and the damned?

Passing by the glittering, luxury cars, with models draped elegantly over the hoods, you might get the impression that you were witnessing the height of power for the automotive industry. Not only has the internal combustion engine reached dizzying heights of refinement, but the plethora of electric, hybrid and fuel cell engines could leave you […]