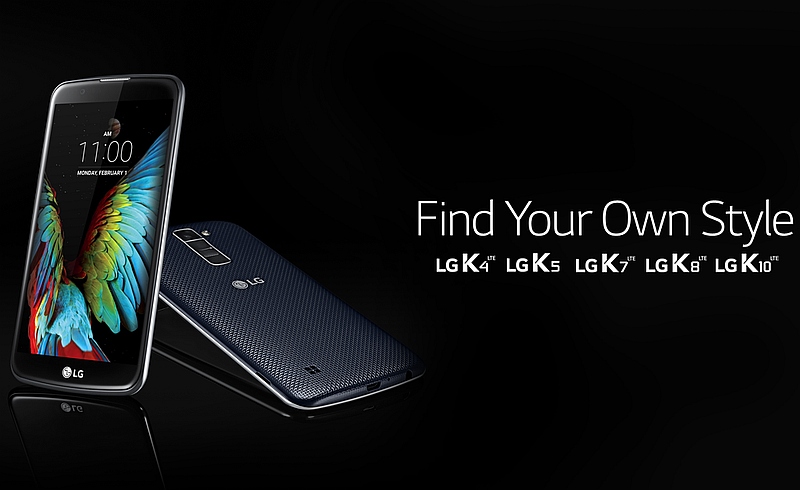 LG on Tuesday revealed the complete lineup of its recently introduced K-Series smartphones. The company on its Facebook page mentioned some new models that will launch in the future. LG last week at CES 2016 already launched its K10 and K7 smartphones.

The LG Mobile Facebook post features an image of the LG K4, LG K5, LG K7, LG K8, and K10. The company has not mentioned any details about the smartphones, beyond introducing the already launched K10 and K7. “As part of LG’s new affordable mid-range smartphone series, the K10 and K7 stand out both in design and camera features. The glossy pebble design complemented with intricate woven back patterns provide a better grip and unique features including the ‘gesture interval shot’ and ‘tap and shot’ will bring a hassle-free selfie experience to those in use.*Specifications may vary depending on region,” said the post.

Earlier this week, the LG K4 was seen in the official promo video of the LG K10 and LG K7 uploaded recently on YouTube. From the video its not hard to decipher that the K4 is smaller than both K7 and the K10, which feature 5-inch and 5.3-inch displays respectively.

At CES 2016, LG had announced the two handsets called the K7 and K10. However, the Korean electronics giant has now made it official that the K branded smartphones are not limited to just two, but an entire line-up of budget devices called the K-series. The range of smartphones that was made official via the company’s social […]

Lenovo, after launching its A7000 Turbo smartphone in India earlier this week, has now launched a new smartphone dubbed Lemon 3. Launched in China, the handset carries a price tag of RMB 699 (approximately Rs. 7,000), the same as that of Xiaomi Redmi 3, which launched this week. Available in Silver and Gold colour variants, […]

Samsung is kicking off the new year with updates to three of its midrange Android smartphones. Available later this month, the metal-and-glass versions of the Galaxy A3, A5 and A7 for 2016 have the look of a premium phone but without the cost — or hardware chops — of a flagship model. Instead, they’re made […]