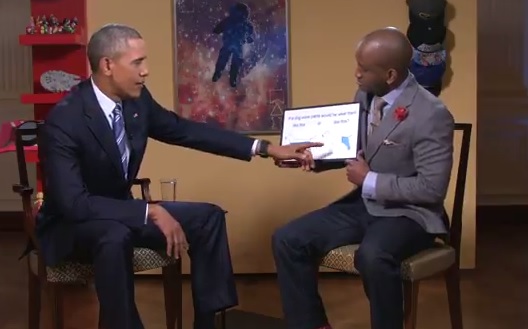 Obama also talked about health care, terrorism and the tenor surrounding the of Republican debates. But when Adande Thorne, who goes by Swoozie on YouTube, asked him who the better rapper was, the president didn’t hesitate to name his favorite.

“I gotta go with Kendrick,” Obama said. “I think Drake is an outstanding entertainer, but Kendrick, his last album, was outstanding. Best album of last year.”

Thorne was joined by Destin Sandlin, who runs the “Smarter Every Day” show on YouTube, and Ingrid Nilsen, aka YouTube’s “Missglamorazzi,” to interview the president at the White House only a few days after his final State of the Union address.

Obama also discussed some serious topics. He told Sandlin that he was “confident that we can get to Mars” and wanted to raise NASA’s funding by a few percentage points. On the topic of cancer research, he said that we wouldn’t see a cure in five or 10 years, but that it’s “possible that in 20 years we will see strides in fighting cancer that he haven’t seen before.”

And although he admitted he hasn’t yet seen “Star Wars: The Force Awakens,” he did name his favorite “Star Wars” character.

Google’s Eric Schmidt Meets With Pope Francis at the Vatican

Eric Schmidt, executive chairman of Google parent company Alphabet, had an unusual meeting on his calendar on Friday — a private sit-down with Pope Francis at the Vatican. Neither Google nor the Vatican would comment on what the two discussed during the meeting, said to have lasted 15 minutes. A video report from the TV […]