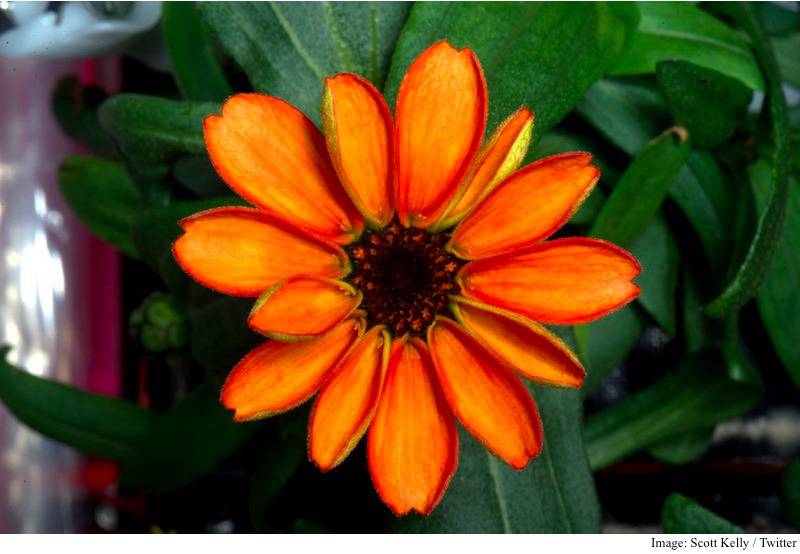 Over the weekend, Nasa astronaut Scott Kelly shared an image of a blooming flower that the crew of the International Space Station has managed to grow. This is the first flower that has been grown in space. The space organisation announced plans to grow flowers last November.

A flower has bloomed in the zero gravity of space. Kelly made the news public on Twitter on Saturday, adding that a zinnia plant flowered. “First ever flower grown in space makes its debut! #SpaceFlower #zinnia #YearInSpace,” he wrote, adding: “Yes, there are other life forms in space!”

The team grew zinnia, a genus of plants of the sunflower tribe within the daisy family, late last year. In August last year, team sampled the first lettuce it had grown in space, and said it tasted “awesome.”After starting the zinnia flower project in November, Kelly noted the plants’ condition started to wither amid excessive humidity and limited air flow. Kelly said he had to channel his inner Mark Whatney, a reference to the popular 2015 motion picture, and made some alteration to the way the plant was taken care of including changing when to water the plant.

“The zinnia plant is very different from lettuce,” said Trent Smith, Veggie project manager. “It is more sensitive to environmental parameters and light characteristics. It has a longer growth duration between 60 and 80 days. Thus, it is a more difficult plant to grow, and allowing it to flower, along with the longer growth duration, makes it a good precursor to a tomato plant.”

The mission of Kelly and his team is to study the effects of a long-term stay in space. The ability to grow plants beyond Earth’s boundary is a small step toward setting up human colonies in space, Mars and other planets.

Nasa announced Veggie project in 2014 to produce plants and flowers in Nasa. As you can imagine, there are a number of challenges, including pouring water, in growing anything in space. For this, the team has a special irrigation system that delivers moisture to the plant pillows from below.

So, You Want to Become a Notary Public

You probably have seen these people doing their work on television shows, and you may have even used one in life. Their function is important in our society. They examine certain types of documents and determine their authenticity. They will then apply their notary seal to the document. There are many documents that need a […]