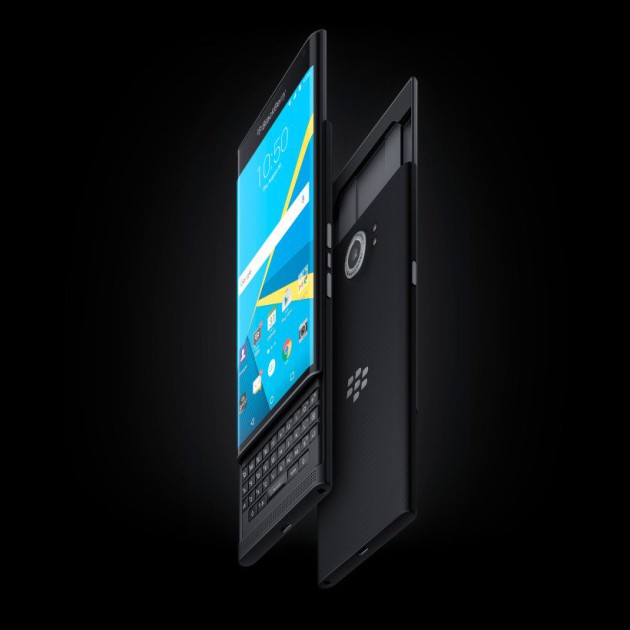 Now that its exclusive carrier arrangement to sell the flagship is out of the way, BlackBerry’s Priv is being sold by T-Mobile. The carrier stated last week it would begin selling the handset on January 26, and today orders were accepted on schedule. 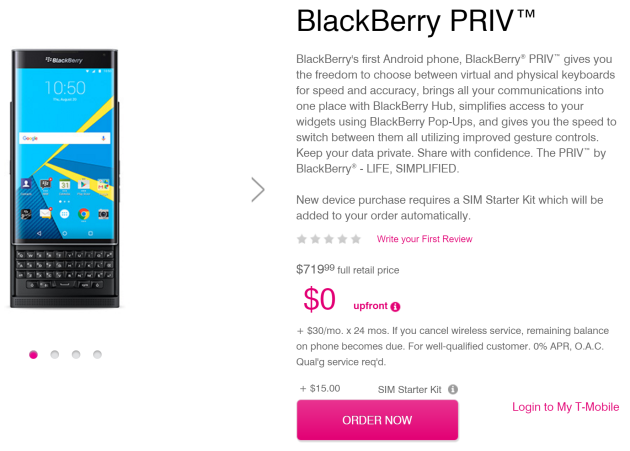 T-Mobile customers have a number of ways to purchase the Priv, assuming they want a handset with a slide-out physical keyboard sitting behind a 5.4-inch display. Longtime, trusted customers can get the Priv for $30 per month for twenty-four months without putting any money down. Through the JUMP! On Demand program, the monthly payments become $34 spread across eighteen months. Those building credit can pay $396 upfront and get the handset for $13.50 per month for twenty-four months. However, you can purchase it outright by laying out $719. That seems like a steep price, but it’s about right when compared to offerings from Samsung and LG.

Verizon customers have been waiting since November to see the handset become availability. It was three months ago when Big Red posted that the Priv is “coming soon.”

The BlackBerry Priv has a 5.4-inch Quad HD (2560×1440) display, Qualcomm Snapdragon 808 processor with 3GB of RAM, 32GB of internal storage and a microSD card slot, 18MP / 2MP cameras, 3410mAh battery, and Android 5.1.1 built into an extremely secure framework. Apparently consumers have liked the Priv because BlackBerry is expanding its availability, launching in India in two days.

BlackBerry’s early success with the Priv has pushed the company to make a direct switch to Android for their 2016 devices. A handset with the codename Vienna, which features an always-present physical keyboard, leaked a few months ago showing BlackBerry pairing Android with a form factor the company is known for.

Last week, Samsung unveiled its latest Galaxy J series smartphone dubbed the Galaxy J7 Prime in Vietnam. Today, according to Mumbai-based independent retailer Mahesh Telecom, the company has launched the phone in India. The Galaxy J7 Prime is a mid-range offering that sports a fingerprint sensor, which is integrated into its home button. The Samsung […]

A month after its China launch, Gionee has launched the Marathon M5 Lite in India. Priced at Rs. 12,999, the big-battery smartphone is available via the company’s online store. Notably, the version launched in India comes with 32GB of inbuilt storage, and 3GB of RAM. The Gionee Marathon M5 Lite variant launched in China in […]