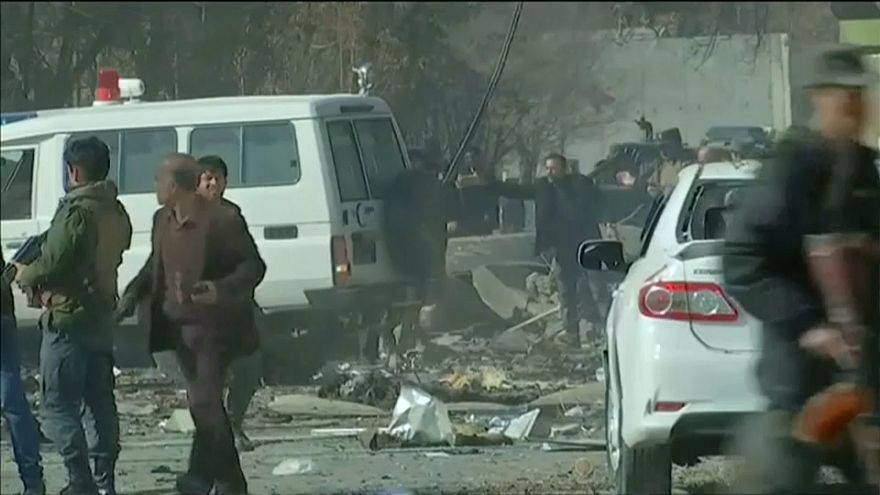 In January, the Afghan capital witnessed a suicide attack unlike any other.

The Taliban filled an ambulance with explosives and detonated it killing 103 and wounding 235 people.

Malala High School is an all-girls faculty and is 10 metres from where the blast took place.

The school Principal Shafigha Ahmadi Vardak presented the Minister of Education, Mirwais Balkhi with fragments of the blown-up vehicle.

Her account of that day is shocking and disturbing.

Malala High School Principal Shafigha Ahmadi Vardak says, “We just collected a big piece of the blown up ambulance…I saw a hand that had been cut off, but was still moving. Even now when it’s stormy, there are trees on the other side of the building from which hats, boots, and body parts fall to the ground”.

Minister of Education, Mirwais Balkhi says, “You see, the Afghan people came back the next day, even though they were afraid they returned to work”.

Our Reporter Masoud Imani Kalesar asks, “But what do we do about the Taliban? Do we make peace, or fight violence with violence?

Mirwais Balkhi says, “Some government elements in our region are exploiting uneducated people. They are responsible for the murder and bloodshed”.

Our reporter asks, “Would boosting literacy put an end to suicide attacks in the country.

According to a UN report released last year, over 900 children were killed in 2016, while on their way to and from school.

On “Bloody Saturday” in January, Malala school was mercifully closed.

Mirwais Balkhi explains, “Compared to boys, the education of girls is a serious problem. Girls want to finish high school and go to university. But we don’t have enough schools in the country”.

Our reporter Masoud asks, “With so much instability and insecurity, how can we expect students to study?”

“Frankly, the people of Afghanistan are very brave, despite the different kinds of threats we face in this country. Among our people there is very much a thirst for education”.

Our reporter asks, “Why, as minister of education do you need to be accompanied by armed bodyguards. It’s rare scene in many countries, let alone in a high school”.

“What I do, and what Mrs Vardak does is no different to what a soldier does on the front line. And, warmongers are always looking for ways to eliminate me, So, I have no choice but to surround myself with bodyguards so we can fight ignorance”.

On April the 30th four days after this report was filmed, there was another suicide attack killing nine journalists.

Fighting continues as on Sunday, two children were killed and a third critically wounded.

It’s after a bomb in a rubbish bin exploded in Kabul.

Fighting continues as President Ghani may offer the Taliban ceasefire during next months Eid holiday on 22 August.

What Are The Things To Keep In Mind While Taking CAT Exam?

Education policy makers and opinion leaders are meeting Tuesday to discuss the initiatives African governments are making to entrench disability inclusive education in the continent in their respective countries. The acting director for special education, Mr Fredrick Haga, said international agreements and conventions are calling for education services to be provided in an inclusive manner. […]