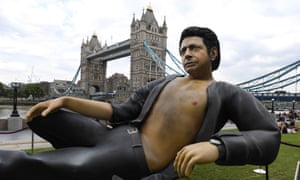 Forgive me, for I am about to break rank. When I saw that a giant statue of Jeff Goldblum in sweaty, semi-naked repose had been unexpectedly erected near Tower Bridge, my pulse did not quicken. My palms did not bead with sweat. My desire – for a new Facebook display picture, or otherwise – did not pull me compulsively towards the Thames. I was left cold by “Sexy Jeff Goldblum” – which is not to say I am left cold by Jeff Goldblum. I have a pulse, and a formative memory of him attempting pick-up artistry on Laura Dern from the back of a Jeep in Jurassic Park.

Online appreciation for his sultry turn as Dr Ian Malcolm in that film has seen Goldblum go from cult figure to fully realised sex symbol in recent years, with many memes made of his open-shirted form. It is as the “chaos theorist” that Goldblum appears rendered nearly 10ft (3m) tall and 23ft long on the South Bank. “Jurassic Jeff”, a stunt by Sky’s subscription service Now TV to mark the 25th anniversary of Steven Spielberg’s blockbuster, has received adulatory coverage since it was installed last week. Goldblum himself awarded it the highest of accolades: “10/10 GOLDBLUMS”.

I’d put it at two or three, at most. Viewed most generously, Jurassic Jeff is a totem to the female gaze, a modern riposte to centuries of women being put on pedestals. It is also no small physical feat, reportedly having taken more than 250 hours over six weeks to construct. But ultimately, it is a publicity stunt, and a very successful one at that.

That may be enough for many to enjoy the statue at bare-chest value and “bask in its nonsensical glory”, as someone put it on Twitter. But some defining images of our time have been advertisements (and some defining artists advertisers). Its commercial imperative is no reason not to ask what Jurassic Jeff and the rapturous response to it says about popular culture. And, Goldblum fan though I am, I would argue it’s nothing good.

It does not comment on or subvert the sly and often surreal use of Goldblum’s image at the centre of his cult online following; it just reproduces one of its main symbols. The statue is nothing more than a meme made manifest, a one-note statement that says: “Hey, you’ve seen this on the internet!” We should ask for more, even of our publicity stunts. Weeks of construction aside, it is lazy, the result of mining the internet for ideas and lifting them wholesale. Yet Adweek hailed it as an “instant classic”.

Jurassic Jeff represents a tired extension to the life cycle of a meme, which – one could fairly argue in light of the $25 T-shirts printed with “big dick energy” on them – was already longer than what could be considered tasteful or humane. Once, memes began their lives in an online subculture such as 4chan, Reddit or Tumblr and ended them weeks or months later on Facebook, where they’d wash up, spent, to await the final blow: being shared by your mum, or a police force page.

Today the final resting place for an internet joke is the South Bank, or on the side of an apartment block, immortalised in a public space. I’m regrettably reminded of the work of Lushsux, an Australian Banksy aspirant who has made his name with large-scale reproductions of internet culture. Which is to say, he paints a meme on a wall. Apparently he calls it “memefiti”.

Like Jurassic Jeff, Lushsux’s paintings – of Kim Kardashian’s naked selfie, Taylor Swift, one-hit viral wonders such as Harambe the gorilla and the “Cash Me Ousside, Howbow Dah” woman from Dr Phil – often generate media coverage, creating a banal feedback loop: meme is born online, injected into the world, and returned whence it came in the form of breathless news stories. At one point of 2016, entire walls of Melbourne’s famous street-art alleys were given over to spray-painted memes: crying Michael Jordan, Arthur’s clenched fist, approving Drake.

Online, these memes are used widely but deliberately, to communicate meaning – barely repressed devastation, simmering anger, permissiveness and denial – in an infinite variety of contexts, from relatable everyday observations to principles of urban planning. On a wall, they say nothing. Corporations co-opting symbols and subcultures is nothing new, but it’s particularly self-defeating in the case of memes, which are self-perpetuating and, fundamentally, fleeting. Their meanings are mutable – look how the lovable downbeat Pepe the frog cartoon was moulded into a symbol of hatred by the alt-right, even as its creator launches a legal challenge to prevent it. Digital culture is rich and nuanced, and has the potential for real-world impact. It deserves to be dug into and engaged with meaningfully, not just skimmed off the top for a punchline.

But, in part because of the social media chatter and column inches generated by large-scale, facile stunts such as Jurassic Jeff, these hollow displays of cultural literacy are everywhere – in Hillary Clinton tweeting at Trump to “delete your account”, hashtags on everything, a book deal for Grumpy Cat, a TV show developed from a Twitter account, and a modern language reduced to a “contemptible and manipulative” film.

How to record internet culture poses a challenge for today’s archivists, but lifting it wholesale, without context or analysis, benefits no one (bar, often, the corporations). Landing memes writ large on the Thames reflects a flattening of culture, a subtext-free call and response. We see Jurassic Jeff, we recognise him from the internet, and we send him back there on our Instagram stories and Facebook feeds.

Better to give our attention to art and spectacle that actually mean something, and leave memes in their natural habitat online, to live, morph and – eventually, thankfully – die.

The World Bank has said net neutrality should ensure greatest possible Internet access to users and not undermine their fundamental rights and freedoms, voicing concern over moves by companies globally including Facebook in India to provide people free Internet with restricted access. “Care should be taken to ensure that users have the greatest possible access […]

John Krafcik, the head of Google’s project to develop self-driving vehicles, said on Thursday he would have to see specific proposals before entering into a consortium including automakers. Krafcik appeared with U.S. Transportation Secretary Anthony Foxx, who spoke of working with companies to develop safety guidelines for self-driving vehicles. Krafcik was asked whether Google would […]

Periscope has been all the hype, with over 100 million broadcasts created since launch. This makes it all that more shocking that Twitter’s live video streaming service hasn’t been fully integrated to the social network. So far Twitter has pretty much served as a middle man that offers a link to Periscope’s own site/app. This changes today… at […]