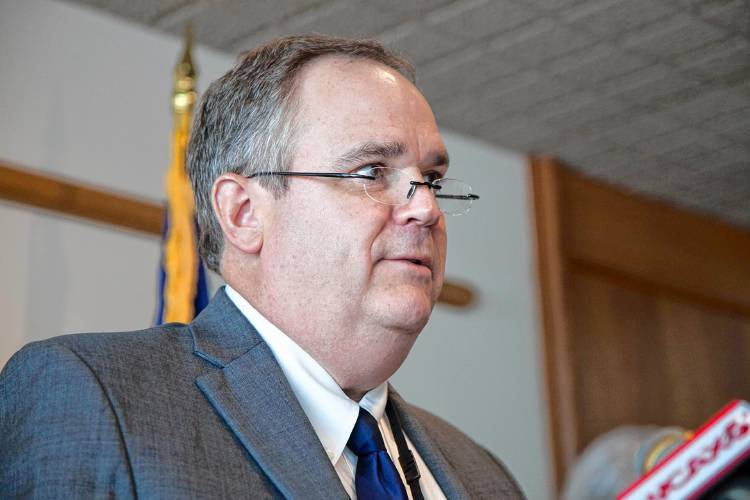 Montpelier — Gov. Phil Scott has named Dan French, a veteran Vermont school superintendent, to be the state’s next education secretary.

Scott has made cost-containment his hallmark education priority, and during a press conference on Thursday announcing French’s appointment, he reiterated the need to create an education system that’s “sustainable and affordable for taxpayers.”

French, he said, was “the right person with the right experience at the right time.”

Scott asked the State Board of Education to think outside the box in its search for a new head of the Agency of Education, but with French he ended up settling on a well-known figure in Vermont’s education community.

The governor said early on in the process that he wanted a secretary who shared his views on education, but said on Thursday he applied “no litmus test” while interviewing the three candidates forwarded to him in late May.

French told reporters he agreed “spending is an issue” and said he looked forward to working with the Legislature to find a fix.

“I’m hoping we can partner to find a solution to this very complex situation. But we have to do so rather urgently, because many of our ideals that we hope for for kids aren’t going to be possible unless we figure out a way to make a more sustainable system,” he said.

Scott’s focus on education spending has been a driver of the tension that has built up over the past two years between him and Democrat-controlled Legislature, brining Vermont to the brink of a government shutdown during the most recent legislative session.

The former education secretary, Rebecca Holcombe, abruptly resigned on April 1 due to unbridgeable policy differences with the governor, according to her husband and other education officials — contradicting Scott, who attributed her exit to “personal reasons.”

Since stepping down, Holcombe has been publicly critical of Scott for what she has characterized as a heavy-handed, simplistic approach to tamping down school spending. But on Thursday, she took to Twitter to compliment the governor’s pick.

“He is a distinguished and knowledgeable leader with a good understanding of the state,” she wrote. “Congratulations, Dan!”

French, 54, has masters and doctorate degrees in education administration and leadership.

He was most recently the school leadership program coordinator at Saint Michael’s College, and was president of the Vermont Superintendents Association from 2010 to 2012.

Before that, he spent nearly 10 years as the superintendent of the Bennington-Rutland Supervisory Union, and before that 10 years as a principal in the Northeast Kingdom.

He’s also consulted extensively for school districts as they worked through mergers under Act 46, the controversial school district consolidation law, which is entering into its final phase.

Members of the education community described French as a well-respected, fair-minded and deeply methodical administrator with a knack for managing even the most complicated and unwieldy systems.

“He’s a very serious person. And my experience working with him is that he looks at what needs to be done and then sets out doing it,” said Jeff Francis, the current executive director of the Vermont Superintendents Association.

It would be hard to overstate the problems the state’s public education face, Francis said, but French has the skill set to deal with them head-on.

“We’ve gone through a massive reorganization of the system. The governor’s points about declines and enrollment and the need to be responsive in a proactive way, I think resonate anybody who’s paying attention. And I believe, based on what I’ve seen, that Dan will be methodical in responding to that,” he said.

State Board of Education member Oliver Olsen, a Scott appointee, has gotten to know French in several capacities. While in the legislature, Olsen was one of the architects of Act 46. He and French presented on the law together to local communities while French was the superintendent of the BRSU, where Olsen’s children attend school.

“As we are in the final stages of implementation of Act 46, he’s definitely the right person for the job,” Olsen said. French, he added, “has been involved really on the ground level in thinking about new structures. And not just new structures, and also the possibilities that could develop within these new structures.”

“It is arguably the most complicated supervisory union in the state,” Olsen said. “My overall impression was that he ran a very tight ship, he was a very structured thinker and was good at communicating.”

State Board member Bill Mathis — who has clashed with Olsen in the past — credited French for being attentive to equity in his approach, which was “very important to the State Board.”

As for how French would balance pressure from the governor’s office on spending with pushback from educators, Mathis acknowledged French was in a “tough place.”

“He’s going to be tested, much as Rebecca was tested in terms of finances and priorities,” he said. “I think he will do quite well. How that relationship works out over time, we’ll have to see.”

The Ministry of General Education has developed a plan to transform the education sector by improving school infrastructure, furniture, learning materials and teacher recruitment. Minister of General Education, David Mabumba has urged teachers in Livingstone and Kazungula districts to support the developments that the ministry has embarked on. Speaking when he addressed teachers in Livingstone […]

Mr Sitharam said that the IIT-G will soon have a centre for disaster preparedness. New Delhi:  Newly appointed Director of IIT-Guwahati (IIT-G) T. G. Sitharam is planning to expand the reach of the institution to other parts of the northeast by opening extension centres. Mr Sitharam, who took charge of the institution on July 1, […]