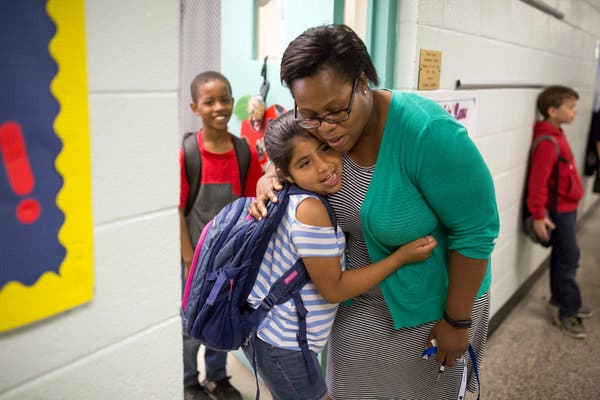 In 2009, Time magazine hailed School of One, an online math program piloted at three New York City public schools, as one of the year’s 50 best innovations. Each day, School of One software generated individualized math “playlists” for students who then chose the “modality” in which they wished to learn — software, a virtual teacher or a flesh-and-blood one. A different algorithm sorted teachers’ specialties and schedules to match a student’s needs. “It generates the lessons, the tests and it grades the tests,” one veteran instructor marveled. It saved salaries, too, thereby “teacher proofing” (as policy wonks say) education in a few clicks.

Although School of One made only modest improvements in students’ math scores and was adopted by only a handful of New York schools (not the 50 for which it was slated), it serves as a notable example of a pattern that Andrea Gabor, who holds the Bloomberg chair of business journalism at Baruch College/CUNY, charts in “After the Education Wars.” For more than three decades, an unlikely coalition of corporate philanthropists, educational technology entrepreneurs and public education bureaucrats has spearheaded a brand of school reform characterized by the overvaluing of technology and standardized testing and a devaluing of teachers and communities.

The trend can be traced back to a hyperbolic 1983 report, “A Nation at Risk,” issued by President Ronald Reagan’s National Commission on Excellence in Education. Against the backdrop of an ascendant Japanese economy and consistent with President Reagan’s disdain for public education (and teachers’ unions), “A Nation at Risk” blamed America’s ineffectual schools for a “rising tide of mediocrity” that was diminishing America’s global role in a new high-tech world.

Policymakers turned their focus to public education as a matter of national security, one too important (and potentially too profitable) to entrust to educators. The notion that top-down decisions by politicians, not teachers, should determine what children need was a thread running through the bipartisan 2001 No Child Left Behind Act, the Obama administration’s Race to the Top and state-initiated Common Core standards, and the current charter-driven agenda of Secretary of Education Betsy DeVos. “Accountability” became synonymous with standardized tests, resulting in a testing juggernaut with large profits going to commercial publishing giants like Pearson.

The education wars have been demoralizing for teachers, over 17 percent of whom drop out within their first five years. No one believes that teaching to the test is good pedagogy, but what are the options when students’ future educational choices, teachers’ salaries and retention and, in some states, the fate of entire schools rest on student test scores?

In meticulous if sometimes too laborious detail, Gabor documents reform’s institutional failings. She describes the sorry turns in New York City’s testing-obsessed policies, the undermining of Michigan’s once fine public schools (spurred in part by constant pressure from the DeVos family) and the heartbreaking failure of New Orleans to remake its schools after Hurricane Katrina. The largely white city establishment bypassed the majority-black community, inviting philanthropists and the federal government to rebuild its public schools as the nation’s first citywide, all-charter system. A dozen years later, more than a third of the city’s charter schools have failed.

These grim realities are not Gabor’s whole story. She takes pains to highlight diverse school districts that have succeeded, mostly by directly or indirectly implementing the “quality management” philosophy of W. Edwards Deming, the subject of one of her previous books. She sees Deming’s bottom-up, collaborative approach in New York’s progressive school movement, in postindustrial Massachusetts and in the large Leander district of central Texas as well as in inspiring, educator-led experiments across the country based on community participation, teacher voice, professional development and student-centered pedagogy.

More than 85 percent of the nation’s children attend public schools, yet decades of privatizing have damaged public education. “After the Education Wars” helps us to see a better way forward.

Months after it swept to power, Ontario’s new Progressive Conservative government has quietly rolled out what it’s calling an “unprecedented consultation” on the province’s $29-billion education system. The chances for input, which will take a variety of forms, including phone town halls and emailed submissions, are the result of Premier Doug Ford’s election campaign pledge […]

Delayed openings at some schools for new training, familiarization A delayed opening this week for 39 schools in the Newfoundland and Labrador English School District was the result of efforts by the provincial government to keep moving on the new Education Action Plan. According to information provided by the Department of Education and English school […]

John Coolahan, emeritus professor of education at NUI Maynooth, who has died aged 77, was the premier authority and one of the most influential shaper of government policies in Ireland for over six decades in all sectors of learning. Soft-speaking “Johnny”, as he was called, was a tall burly man with a gift of reconciling people […]