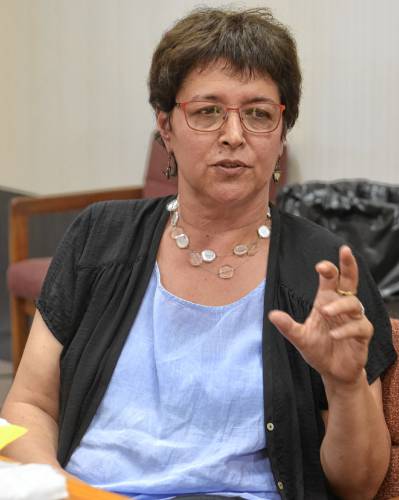 AMHERST — Providing better state funding for local school districts, lessening the impact of charter schools and promoting equity for all students are among objectives the candidates to become the next state representative for the 3rd Hampshire District share.

Mindy Domb, the executive director of the Amherst Survival Center, and Eric Nakajma, chairman of the Amherst-Pelham Regional School Committee, both Democrats seeking election to the seat that represents Amherst, Pelham and Precinct 1 in Granby at the Sept. 4 primary, pledged to be advocates for public education during an Amherst Education Foundation forum at the Amherst Regional Middle School Monday evening.

Growing up in Amherst, Nakajima said public education became a personal matter to him.

“The Amherst public schools essentially saved my life, because it was a refuge, it was a place I felt supported, it was literally a home,” Nakajima said.

He added that he appreciated the University of Massachusetts was accessible to him and provided him a higher education, even when not fully oriented toward his studies.

The proud parent of two children who are now graduates of the Amherst public schools, Domb said she will always champion public education.

Domb noted that she served as the leader of group that helped build resilience for LGBTQ youth, working with educators to create a transformative experience that helped many students gain acceptance in their schools.

Both candidates said they are disturbed by the failure of the Legislature to act on the the 2015 Foundation Budget Commission Review commission report that stated public schools are underfunded by more than $1 billion a year. One of their first actions would be to ensure better funding of schools, through measures such as single-payer health care and a progressive income tax.

Nakajima said schools should provide an environment to nurture the whole child, but to do so they need resources and programs to provide necessary counseling and support services.

Domb said schools should provide a shared experience and similar curriculum, where students can become engaged citizens. She noted she is a proponent of curriculum to be similar across the state, that such uniformity would allow comprehensive sexuality education that is age-appropriate and LGBTQ-inclusive.

On charter schools, Domb said the way they are funded needs to change. “I think the funding mechanism is unfair, and I think it has to stop,” Domb said.

Domb would stop allowing them to take money without any public scrutiny, what she describes as “robbing our schools” of funds.

In 2016, Nakajima said, he worked to maintain the cap on the number of charter schools, but the funding formula remains troublesome.

“It’s profoundly unfair and, by the way, it was designed to be this way from the beginning,” Nakajima said.

Nakajima said he is not sure where charter schools fit in, especially with his hope to have the state fund universal preschool.

On equity, Nakajima said he recognizes the hope to lift up every child, using restorative justice techniques and having a customized program for each student. Nakajima said there needs to be a better understanding of how gaps occur, such as fewer students of color taking AP courses.

“Equity to me means a core commitment to valuing experience of every child when they come in the door,” Nakajima said.

Domb said schools need to make sure there is access for all students, which also includes family support and nutrition, “People can’t learn if they are hungry,” Domb said.

Professional development, she said, can allow educators to understand their implicit biases, so they stop tracking students in certain ways that may inhibit the education for some students.

Domb said though she is a female candidate, and her election would reduce some of the imbalance where the Legislature is still 75 percent male, she sees herself foremost as a coalition builder.

Nakajima said he tries to be aware of the power dynamics that may diminish or marginalize women, observing that when he worked for the Patrick administration he regularly interacted with women in leadership roles.

Nakajama said he wants to be accessible and respond to concerns immediately from constituents and make sure they feel he is working for them.

“I can really think of nothing more important to advocate for and to fight for,” Nakajima said

Domb said she has been meeting with educators to learn about their needs and how she might be able to help, and would explore having a standing advisory group of students from the three district towns.

“I see education as pre-K through Grade 16, and I will work for tuition-free public colleges and trade schools,” Domb said.

Over 100,000 students mobilized in Bogota and major cities in Colombia on October 10, seeking an increase in the budget for public higher education, reassessment of the student debt, financial support for the National Learning Service (SENA), and freezing of enrollments to private higher education institutions. They also demanded that the right to social mobilization […]

The priorities for education and research in Italy

In Italy, the overriding aim of higher education is to promote the scientific progress of the country and to ensure that all citizens can take part in education and training that will lead to employment. When it comes to higher education in Italy, the key principles are detailed in the Italian Constitution, adopted in 1947. Article […]

When it comes to things like the economy or the military, the United States is considered among the strongest countries in the world. But when it comes to education, the U.S. isn’t making the grade, says Dr. Tanji Reed-Marshall with the Education Trust, a Washington D.C.-based group that aims to pinpoint and fix problems and […]