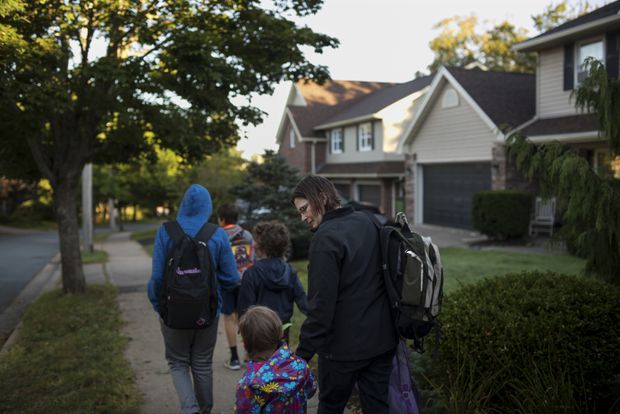 With several primary schools bursting at the seams less than a month into the new term, parents of young students in Halifax fear they are in for a chaotic year.

Nova Scotia made sweeping changes to its education regime last spring that included the elimination of elected school board trustees at its seven English-language school boards. An all-party human resource committee is expected to review recommendations on Thursday for an appointed advisory council that replaces trustees – months after the plan was announced and more than two weeks into the new school year. While School Advisory Councils (SACs) were told they will receive beefed-up mandates in the new system, those have still not been fully extended.

Meanwhile, about 17 per cent of schools in the province’s biggest district were at or over capacity in the past school year, meaning that in many classrooms, the number of students ballooned beyond provincially set caps. In addition, nearly a quarter more of the district’s schools were more than 80 per cent full, according to data released by the Halifax Regional Centre for Education in June.

Concerned parents say they fear that in the revamped system, which is still taking shape, problems with overcrowding will not be addressed in a timely manner.

“It just seems like we’ve made such drastic changes to our education model, and with the lack of communication … it seems to be the chaos is continuing into a new school year,” said Ally Garber, a parent of two and co-chair of the SAC at Basinview Drive Community School in Bedford, N.S.

Much of the overcrowding in the Halifax board is concentrated at schools in fast-growing pockets on the outskirts of the city, as well as in the bedroom community of Bedford, which has seen explosive population growth in recent years as young families move into its new subdivisions and high-rises.

Ron Heiman, director of operations services at the Halifax Regional Centre for Education, acknowledged there are schools where class caps can’t be maintained because of this growth. To deal with overcrowding, Mr. Heiman said portable classrooms are being used, and students in higher grades could be reassigned to another nearby school. However, he said the increase in student populations presents an opportunity to assess current infrastructure.

Parents at Basinview have been dealing with overcrowding for several years and were pleased with the province’s recent announcement of a new school in Bedford. They say it will be years, however, before that school is built and Basinview, which has the province’s most extreme case of overcrowding, needs solutions now to accommodate its burgeoning class sizes.

The school decided to send its sixth-grade students to a nearby junior high school this year but that did not fully solve the problem, Ms. Garber said. “We are still overcapacity,” she said, adding: “There are a lot of unanswered questions in the community with all of this rapid development happening around us.”

Ms. Garber did commend the government for working to address some “significant issues with our education model” in making its changes. “But you have to wonder, have we been moving too quickly and not thinking about the implications?” she added.

Paul Wozney, president of the Nova Scotia Teachers’ Union, said that while parents wait for the new system measures to be put in place – appointed representatives, for example – there will be an effect on students in swollen classes.

Overcrowding “has a significant impact on student learning and teachers’ ability to teach students,” he said, adding: “Elected school boards, for all their flaws, stuck up for kids. There is no kids-first group in the mix … to deal with systemic concerns.”

Karen Saweczko, chair of the SAC at Park West School in Halifax, has four children who attend the kindergarten to Grade 9 school, which has faced overcrowding as a result of its popularity among families in the Clayton Park community. While 15 classrooms at the school were over their cap last year, the number is now down to nine classes after a boundary verification forced parents to prove they actually live in the school’s catchment area.

Ms. Saweczko said it is unclear now whether that decision is in jeopardy.

“The schools are kind of saying, ‘What is the new order now? Who is the final decision-maker?’ Nobody seems to know that,” she said. “We are not getting a lot of direct communication.”

Education Minister Zach Churchill said there are staff at regional offices that liaise between SACs and the Department of Education.

“We’ve been receiving the concerns from community members,” he said. “We’ve responded with portables, additional teaching resources in schools and staffing to meet the needs.”

Mr. Churchill said that parents who sit on SACs can expect to receive training for their enhanced roles shortly. SACs are generally in place a few weeks after the school year begins.

Secretary of Education Betsy DeVos has stoked public outrage more consistently than any other member of President Donald Trump’s Cabinet, a group not principally known for evading indignation. But perhaps DeVos’s most alarming error to date has received insufficient public attention. This disregard is regrettable because her blunder illuminates one of the U.S. Supreme Court’s most momentous […]

Messy Fun in the Early Classroom

Working in early childhood education is rewarding and fun. Whether you work with toddlers in Seattle or pre-K Tampa, there is a universal truth about little ones: they love to get messy! Sensory Children learn through play, so encourage that by making playtime appeal to all of their senses. Put art smocks on your students […]