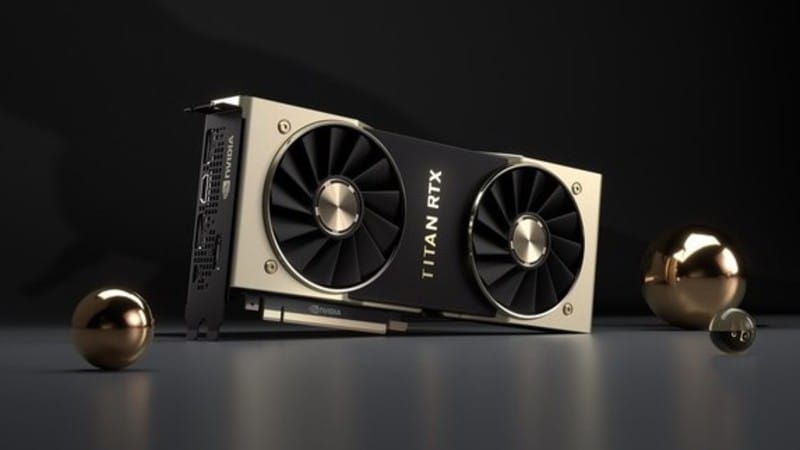 Shortly after rolling the first high-end gaming GPUs based on its new Turing architecture Nvidia has announced its next ultra-high-end Titan-series offering. The new Nvidia Titan RTX GPU is a somewhat beefier version of the GeForce RTX 2080 Ti, using the same TU102 GPU but without any of its hardware disabled. It will also feature a whopping 24GB of high-speed GDDR6 RAM. The primary target audience for Titan RTX graphics cards will be AI researchers, data scientists, and content creators. It will also be able to handle all the games that its GeForce RTX siblings can, with full support for Nvidia’s much-touted ray tracing and Deep Learning Supersampling (DLSS) algorithm.

According to Nvidia, a card like this is ideal for neural network training and inference. The large amount of RAM, plus support for the NVLink interconnect to combine the memory pools of two such cards, would help researchers work with enormous data sets. The powerful new graphics card is also being touted as a tool for studios that work on games and VR experiences built around ray tracing. The Titan RTX will be an alternative to Nvidia’s pro-grade Quadro RTX GPUs, bridging the workstation and gaming markets. The price in India will be Rs. 2,24,000 including taxes, which is lower than the Rs. 2,81,800 list price of the outgoing Titan V model, which was launched almost exactly a year ago.

The TU102 GPU is comprised of 4,608 programmable CUDA cores for 3D graphics, 576 Tensor cores for AI and deep learning, and 72 specially designed RT cores for real-time ray tracing. Using Nvidia’s own metrics, ray tracing performance is up to 11 Gigarays per second compared to 10 on the GeForce RTX 2080 Ti, while deep learning performance throughput is rated at 130 Teraflops compared to 57 Teraflops. The Titan RTX has the same 1350MHz base clock speed as the GeForce RTX 2080 Ti, but a higher boost clock speed of 1770MHz instead of 1635MHz.

As for graphics memory, the 24GB of GDDR6 RAM has the same 14Gbps rating as before, but runs on a 384-bit bus for an effective throughput increase to 672GBps, up from 616GBps. The TU102 GPU has approximately 18.6 billion transistors and is fabricated using a 12nm process. Power consumption is rated at 280W. Details of availability in India aren’t certain, but the company has sold previous Titan as well as GeForce GTX graphics cards on its own website.

GeForce RTX 2080 Ti buyers who might be feeling annoyed that their brand new graphics cards aren’t at the top of the performance charts anymore, as the faster, fully enabled GPU will deliver slightly higher scores and could prove to be more overclockable. However, very few gamers are likely to feel that the marginal increase in performance is worth the enormous price difference between the two cards.

Samsung and Lenovo both have unveiled Snapdragon 850 laptops recently, and in order to make these Qualcomm Snapdragon laptops compatible with all Windows apps, Microsoft announced Visual Studio 15.9 last week. This offers developers an SDK and tools for creating 64-bit ARM (ARM64) apps. The Microsoft Store also began accepting submissions for apps built for […]

Seagate is a popular brand in the storage market, known primarily of its hard drives. Though the company has been manufacturing solid-state drives (SSD) for some time now, the focus has been on the enterprise SSD market. However, Seagate has now taken the wraps off of its latest BarraCuda storage drive for enthusiast PC builders. Notably, […]

TP-Link, a popular networking product manufacturer, has launched its new Archer C5400X gaming router. The C5400X MU-MIMO Tri-Band Gaming Router is claimed to be designed to deliver strong and reliable Wi-Fi for heavy-bandwidth gaming and 4K video streaming, and it also comes with support for Amazon Alexa. Equipped with TP-Link HomeCare, the Archer C5400X features […]