Microsoft has officially unveiled the new Surface Go 2 tablet, Surface Book 3 laptop, Surface Headphones 2, Surface Earbuds, Surface Dock 2, and USB-C Travel Hub. Against the backdrop of ongoing lockdowns in multiple countries and uncertainty about the future of working from homes, Microsoft is emphasising that its hardware is designed to show off the capabilities of Windows 10 and allow people to work as well as learn, communicate, and enjoy entertainment. With these new products rounding out its portfolio of tablets, 2-in-1s, laptops, and accessories, Microsoft says it wants to serve users no matter where they are and what. size of device they need. 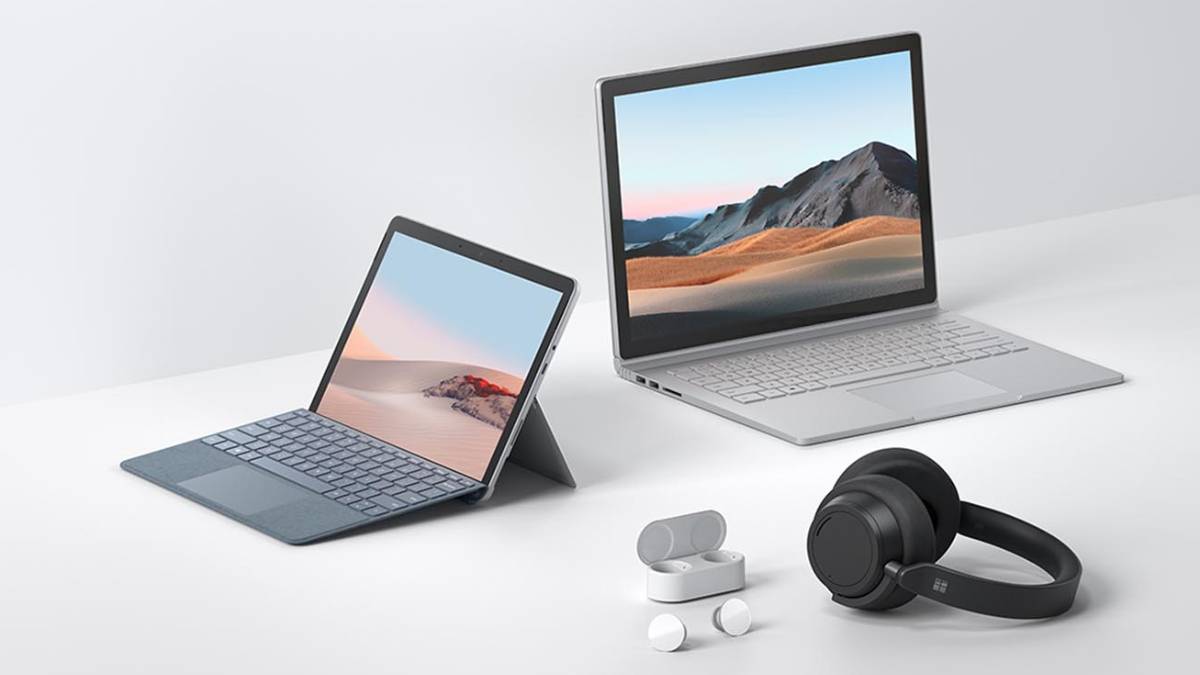 The new Microsoft Surface Go 2 tablet offers a larger 10.5-inch 3:2 1920×1280-pixel screen in the same body as its predecessor. It promises improved battery life and up to 64 percent faster performance on the top-end variant which has an 8th Gen Intel Core M processor. The base model is priced starting at $399.99 (approximately Rs. 30,500) and features an Intel Pentium Gold processor, 4GB of RAM and 64GB of eMMC storage. The high-end model has 8GB of RAM with a 128GB SSD with the higher-end CPU and is priced at $629 (approximately Rs. 47,970) or optionally $729 (approximately Rs. 55,595) with integrated LTE.

The Surface Go 2 has a magnesium body with an integrated kickstand. It weighs just 553g without a keyboard cover. Other common features include one USB Type-C port, Microsoft’s proprietary Surface Connector for charging and accessories, a headphones socket, a microSD card slot, dual “studio” microphones, and a 5-megapixel webcam.

Microsoft’s Surface Type Covers in multiple colours for the new Surface Go 2 will be priced starting at $99 (approximately Rs. 7,550). The device will go on sale starting May 12 in the US, Canada, UK, Japan, Australia, and several European countries.

The premium Microsoft Surface Book 3 detachable 2-in-1 is said to deliver up to 50 percent better performance than previous models. It will be available in 13.5-inch and 15-inch versions. The larger model is said to offer up to 17.5 hours of battery life with improved power efficiency in standby. You can also get a choice of discrete Nvidia GeForce GTX or Quadro RTX GPU for gaming or professional content creation. Microsoft has used Intel’s 10th Gen ‘Ice Lake’ Core i5 and Core i7 processors.

Microsoft has also improved its Surface Headphones with 13 levels of ambient noise reduction, better sound quality and extended battery life. The earcups can now fold flat for easier storage, and on-ear dials can be used to adjust volume and background sound cancellation. Microsoft claims up to 20 hours of battery life and almost an hour’s worth of usage with a five-minute charge. The headphones will be available in black or platinum priced at $249 (approximately Rs. 18,990) starting on May 12.

The brand new Surface Earbuds true wireless earphones are said to offer a comfortable fit and touch controls, plus integration with Spotify. Three sets of silicone ear tips are included, and Microsoft says it has designed custom drivers and tuned them to ensure rich sound. The Surface Earbuds are designed for music as well as voice calls and the dictation features of Microsoft Office. Battery life is rated at up to 24 hours in total including the earbuds and charging case, with eight hours per charge of the earbuds themselves. A 10-minute charge is said to deliver up to one hour of use.

The Microsoft Surface Earbuds will be available in a single Glacier colour and are IPX4 rated for water resistance. They are priced at $199 (approximately Rs. 15,175) and will be available from May 12 onwards.