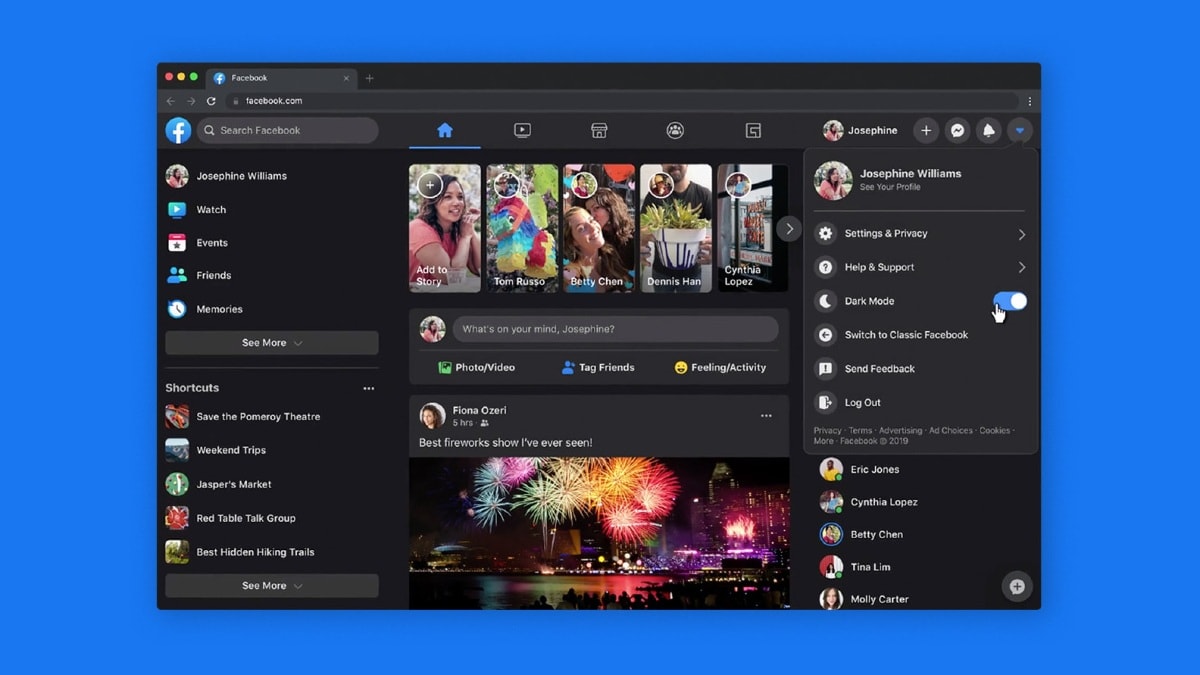 Facebook has announced its desktop design is now available worldwide. In March, Facebook started out rolling the new design to majority of the users, but now it states that all users across the globe will get it. The design was announced at F8 last year and it brings along the anticipated Dark Mode. The new interface is touted to be faster than the previous one, and easier to use as well.

Facebook.com is getting a more streamlined navigation approach, enabling easier discovery of videos, games, and even groups. The social giant claims that home page and other page transitions also load much faster, and is now almost akin to the mobile experience.

In a new blog post, Facebook confirms that all users across the globe are now getting the new Web design. The new design brings a Dark Mode toggle that lets you switch to the greyscale look whenever you prefer. The new Dark Mode switch can be found in the top-right dropdown menu, and can be used to reduce the strain on the eyes.

There is a sidebar on the left that houses your profile link, the dedicated COVID-19 Information Centre page, and offers access to Messenger chats among other things. The Friends list flows on the right corner, and the feed takes all the space in the centre.

There’s a new ‘+’ sign on the top panel that not only lets you create a post or a life event, but it also easily lets you create events, pages, groups, and even ads on Facebook. The social media giant notes on its blog that users can even ‘preview a new Group you’re starting in real time, and see what it looks like on mobile before you create it’. The top panel also has a new Watch section that lists all recommended videos based on viewing history and likes. We also spotted a new ‘Gaming’ option on the top panel that lists all the games that users can play without leaving Facebook.

Everything from the chat window to the user profile has been redesigned, and Facebook says that the new design is rolling out for all users globally. As mentioned, it began rolling out to a majority of users in March, and now all users worldwide should be able to see the new design on their desktop browser.

Chipmaker Intel on Wednesday said it was committed to accelerate the accessibility of Artificial Intelligence tools across industries, and drive the next wave of computing by strategically investing in developer education. To develop AI-ready talent in the country, the company said it had trained more than 99,000 developers, students and professors since April 2017. “We have been […]

The impact of the Internet of Things (IoT) on consumers’ lives and corporate business models is rapidly increasing and by 2020, more than half of major new business processes will incorporate some element of the IoT, research company Gartner has predicted. “This is possible due to the cost of ‘instrumenting’ physical things with sensors and […]