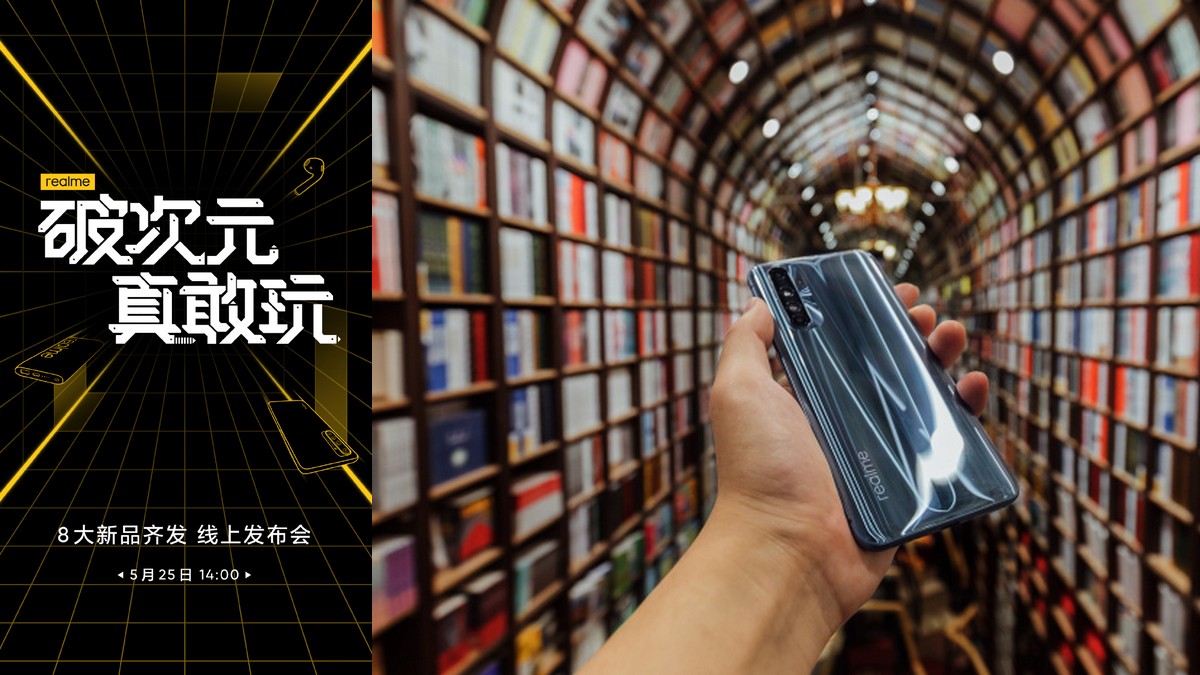 Realme has announced it will host an event on May 25 in China where it plans to unveil eight new products. That’s right, eight new products! Some of these products have been teased in the poster for the event shared on Weibo. They include true wireless (TWS) earbuds, what seems to be a power bank, a smartphone, and more. In a separate post, Realme China CMO Xu Qi Chase shared the photo of the back of a phone with the code name ‘Blade Runner’.

The poster for the event shared on Weibo shows the May 25 date and 2pm (11:30am IST) time. It also shows three products – a smartphone, a power bank, and TWS earbuds. The phone in the poster has a quad rear camera setup in a vertical orientation while the power bank has a regular USB port as well as what seems to be a USB Type-C port, along with some LED lights that may indicate the battery level. The earbuds seem to have an Apple AirPods-like design. These earbuds could be the Realme Buds Air Neo aka Realme Buds Neo that were certified by the Taiwanese National Communication Commission (NCC) in January this year.

Coming to the Weibo post by Realme China CMO Xu Qi Chase, the photo gives a first look at an upcoming Realme smartphone codenamed “Blade Runner”. It has a glossy grey back panel with four cameras aligned vertically. The Realme branding is on the bottom left of the phone. This phone, according to the post, will also be unveiled at the May 25 event.

While there are still several unknown products from the list of eight, there have been multiple Realme smartphones in the news, particularly the model numbers RMX2141 and RMX2052, that were reportedly spotted on Chinese regulatory body TENAA’s website. Additionally, the Realme X3 Super Zoom, Realme X3, and Realme TV also popped up on the company’s Indian website’s support page. These new products may possibly be part of the eight being unveiled on May 25.

Given the ongoing coronavirus pandemic, the event in China will most likely be an online event. As of now, Realme has not confirmed where the event will be streamed but more information is expected in the coming days.

Honor V40 series is said to come equipped with a 50-megapixel main rear camera sensor. Honor V40 Series may be launched in December and ahead of its alleged debut, the specifications of the smartphone have tipped on Twitter. The tipster shared information about the key hardware of the handset. According to the tipster, the Honor […]

Android 11 is coming to eligible Google Pixel phones in India next week, the search giant said in a statement to Gadgets 360. The latest Android update was released earlier this week, and it was rolled out to the Google Pixel 2 and later models globally following the official debut. However, Google restricted the […]