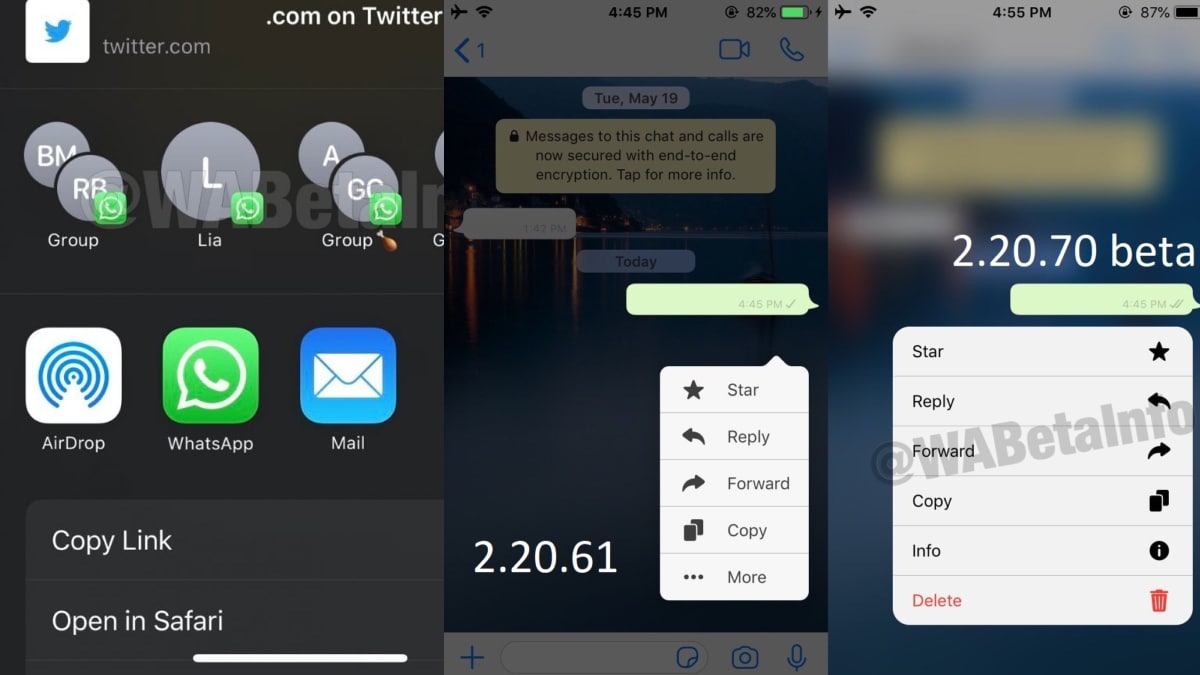 WhatsApp for iPhone’s latest beta update is here and it brings a few useful tweaks that will likely show up in stable version over the coming weeks. The beta versions essentially hint at what’s coming in the future. With the new beta, WhatsApp contact shortcuts will appear in iPhone’s Share Sheet menu, but a few users may not see them yet. These few users are said to include all those who are facing issues while sharing content from few apps since the last beta update for WhatsApp. The new WhatsApp beta version also packs a redesigned menu to emulate the one offered by iOS 13. This was reportedly done because the earlier menu used iOS 13 APIs, and it was not possible to add the same redesigned menu for users having a lower version than iOS 13.

WhatsApp features tracker WABetaInfo has shared all the things that have arrived with latest WhatsApp v2.20.70.19 beta for iPhone. This version adds WhatsApp contact shortcuts in iPhone’s Share Sheet menu. This feature shows small contact bubbles of frequent groups or people users share things with whenever you are trying to share something using iPhone’s Share Sheet.

However, given that a few users are experiencing content sharing issues with the 2.20.70.18 and 2.20.70.19 beta updates, the tracker says that a lot of users may not be able to see these shortcuts yet. WhatsApp should roll out a fix for this soon.

Additionally, with the latest WhatsApp 2.20.70 beta for iPhone update, the instant messaging app has redesigned its menu, emulating the one available on iOS 13. The company had earlier introduced support for the official iOS 13 menu with WhatsApp v2.20.50.21 beta for iOS, but this menu uses iOS 13 APIs, and it was not possible to add the same redesigned menu for users having a lower version than iOS 13. To enable support for iOS 12 and versions below, the company introduced its own menu that looks similar to the one offered by iOS 13.

Alibaba-backed Indian fintech firm Paytm is aiming for a million apps on its “mini app store” by the first quarter of 2021, it said on Thursday, seeking to challenge the dominance of Alphabet’s Google in India’s mobile web economy. Paytm founder Vijay Shekhar Sharma called Google “judge, jury and executioner” after his app was temporarily removed from the Android app store last month […]

Microsoft Word, Excel and PowerPoint apps get new sharing options and much more in latest update

Microsoft has just sent out sizable updates to its Word, Excel and PowerPoint applications on Android, bringing a bevy of new productivity features to each app. All three applications are getting more sharing options, which will allow you to share documents using WeChat and QQ apps, as well as easier sign-up methods for folks who have […]