As people are increasingly looking for solutions to the climate change crisis, alternative fuel sources frequently come up in conversation. You may have heard about compressed natural gas being used for vehicles. Many people think of natural gas as being a way to heat their homes, so this can be surprising. It likely leaves you wondering what CNG actually is. 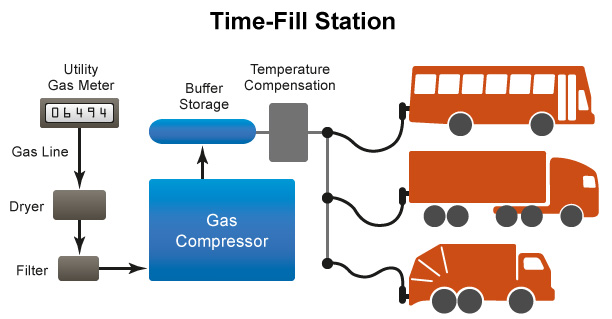 What Is Natural Gas?

Unlike gasoline, natural gas is actually a gas at room temperature. It is a mixture of gaseous hydrocarbons, particularly methane. It is found above oil deposits, in landfills, in water treatment plans and other similar sites. Although it is derived from fossil fuels, it is often considered more environmentally friendly than goal, petroleum and similar conventional fuels.

Natural gas is not renewable and is less favorable from a climate impact perspective than solar or wind. However, it is much more readily available and more practical in many cases.

How Is CNG Used?

CNG is best known for being used as an alternative fuel for automobiles. The energy efficiency is similar to gasoline but with significantly lower emissions (especially carbon dioxide). Vehicles need to be designed to use CNG or they can be converted. However, the system is quite similar to gas and diesel engines. So, the conversion is relatively minimal compared to some other energy sources. Compressed natural gas can also be used for aircraft or other internal combustion propelled vehicles.

Where Can You Find CNG?

There are CNG stations in various locations. As the conversation about climate change grows, CNG fueling station construction has accelerated with it. So, you may find a fueling station near you sooner than you think.

Learn more about compressed natural gas and how it can help us find better fuel sources. You may soon be riding a bus or other vehicle that uses the gas fuel.

Chinese firm LeTV has started sending media invites for an event on January 20 where the company is expected to launch its first phones in India. The company is likely to launch the Le Max alongside the Le 1s smartphone. The official invite for the launch event doesn’t say much about the upcoming devices. LeTV […]

Creating your own whole-home DVR system is about to get a lot simpler, thanks to Plex. Plex Media Server users can now record live TV with either an antenna or a CableCARD using SiliconDust’s HDHomeRun tuners. They can then stream those recordings to phones, tablets, computers, game consoles, set-top boxes, and smart TVs. The feature […]

WeWork, a New York-based provider of shared office space, is planning to set up a business in India, founder Adam Neumann said at the Startup India event in New Delhi on Saturday. WeWork is a four-year-old company that provides shared workspaces largely to startup companies without owning the properties itself. “We want to build a […]